The Trikke Pon-e 48v is your personal urban mobility solution. Enjoy a ride that is emission free, has dynamic maneuverability, a stable riding platform, rechargeable lithium-ion battery, and foldable frame.
The 48v battery provides up to 20 miles on a single charge.
350 watt motor for more uphill torque. 37lbs – 46lbs (with battery).

The Trikke Pon-e 48V is our long-range, high-torque personal transporter. Planning to ride in a hilly area or carry more weight? Then this is the model for you, perfect for getting around town, running errands, or touring and joyriding. This model is also robust enough to withstand the demands of rental operations as an electric rental and tour vehicle. Get hooked on a ride that delivers fun, fitness, and green transportation all in one package. You can also fold up the Trikke EV in seconds, stash it in your car, or carry it on the bus or train. Here’s a green commuter vehicle that really gives back every time you take it for a spin. 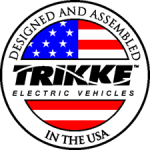